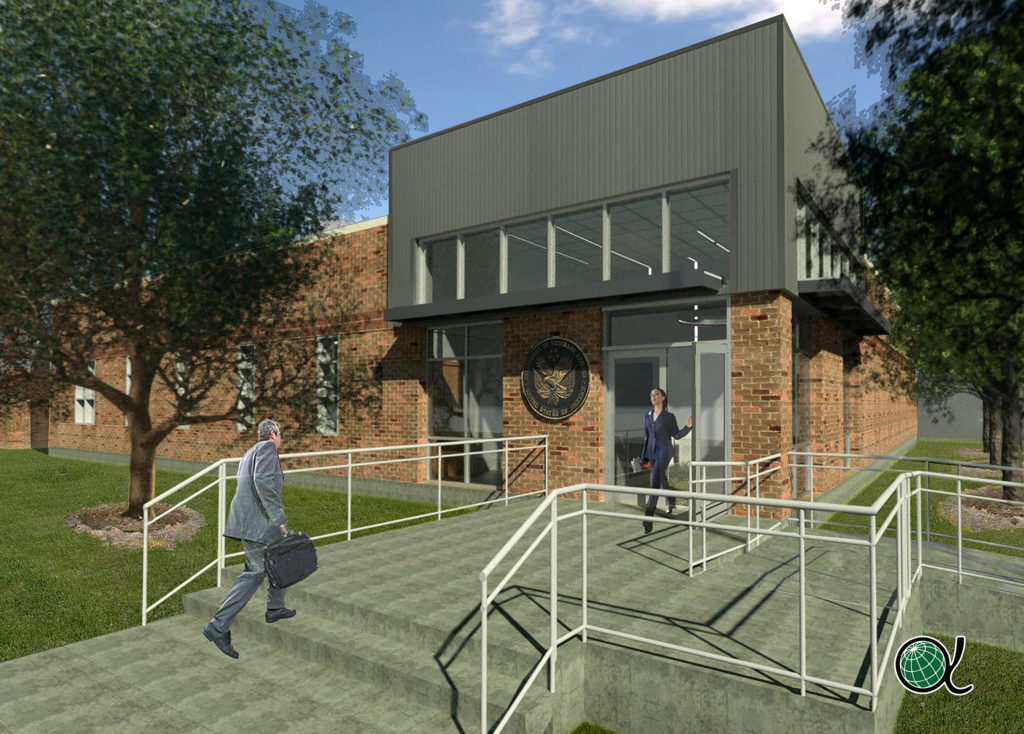 ATEI was selected to design the expansion of the existing Audie Murphy VA Emergency Department (ED) to double the size of the facility and add a Fast-Track program. This project also required design of a new administration building to house displaced Human Resources (HR) personnel and consolidate HR Services in a new location on campus.

The Audie Murphy ED is in the center of the first floor in the main building, land locked by several hospital departments and fire corridors. To expand, other departments had to be displaced; mainly the Human Resources Department which was located across the primary fire corridor for the hospital. An ED divided by a fire corridor, which must always remain open, presented an immense challenge to the design team. ATEI worked integrally with the ED staff to develop a model where the two sides could work independently. Numerous design schemes were considered, and the final design consisted of a high acuity core with a satellite area (across the corridor) for low acuity patients. A fundamental corridor alignment between the core and satellite was a key design feature; creating a streamlined process for transferring a low acuity patient to high acuity area should the scenario arise.

A major component of this project involved a complex phasing plan. The ED is not simply expanding, but the existing treatment areas must be renovated to meet current VA design standards. The ED is critical to the overall function of the hospital, and closing the ED is not an option. ATEI developed the project as four phases. During each phase, hospital functions are only minimally interrupted, and after each phase is turned over each department experiences an increase in functionality. In Phase 1, the new human resources building is constructed in a minimally utilized parking lot. In Phase 2, the old human resources department is redeveloped into low acuity patient treatment areas. In Phase 3, the existing ED waiting, triage areas, and a couple of additional departments are reconfigured into the new ED treatment, triage and waiting area. In Phase 4, the existing ED is renovated to form the second half of the ED treatment core.

Relocating HR was literally a second project within the scope. Working with all stakeholders and responding to numerous personnel changes, the budget allocation between ED and HR was a delicate balancing act. Further complexity was added when the chosen site was the current Engineering Services location housed in temporary modular buildings.

Features and Benefits: Relocating and consolidating all HR functions increased span of control and created a one stop solution for all VA HR needs on campus. Location of HR services with a dedicated parking lot for customers seeking security clearances from the main hospital added convenience. A secure credential and identification function eliminated several recurring inspection discrepancies. A unified electrical and plumbing core allows for future expansion should full funding not occur during the initial phase of construction.

ATI has been supporting federal, private sector and municipal clients for over 25 years.

My interest in the environment and sensor technology drove our initial environmental geophysics business start-up. Since then we have expanded to offer full engineering services.

I wanted to bring a strong design aesthetic to ATI's work, building on solid engineering but integrating the client program and operations.

I watched ATI grow up from the sidelines and was excited to expand the Environmental team to a full-service all hazards consultancy.

Our team bridges science and service by understanding the organizational challenges legacy agencies face and help them to interpret the changing regulatory landscape.